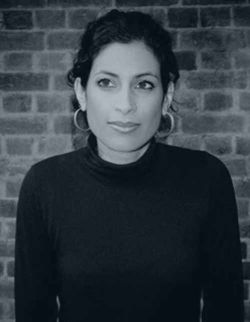 As well as being an extremely corporate presenter for a diverse range of industries, Nadira works extensively as a MC, host and moderator, chairing conferences, conducting interviews, facilitating company meetings, moderating political and topical debates and she hosts awards ceremonies.  Recently, she has increasingly both hosted and moderated events, panels and themes with an emphasis on technology, finance, UN SDGs, AI, the future of work, venture capitalism: investing in tech, digitalisation, 5G, optimising supply chains, sustainability, gender inequalities, wealth disparities, conscious consumption and creation in the Islamic world and many more.

Nadira’s corporate career has also led her to work with numerous high-end clients including Fujitsu, Shell, Royal Airforce (RAF), Microsoft, Samsung Galaxy and Flybe. She is the voice for one of the largest tech companies in the world, Yandex as well as for numerous educational programmes and, memorably, the last Durex campaign in the UK! She’s also recently narrated an 8 part documentary series for Channel 5/Australia Channel 10 called ‘The Royals Revealed’.

Nadira Tudor is an international multimedia broadcast journalist, presenter, host and moderator. Currently working across a broad range of projects including news reading and presenting on Radio(Times Radio) & TV(TalkTV) for News UK and as a journalist & moderator for a number of companies including Reuters Plus and RA & A. She is a former News Anchor and Correspondent for International news; former BBC Presenter & Reporter and former Anchor & Presenter for a number of smaller international niche channels and social network platforms.

She presents and reports on international and UK domestic breaking news and on more generic news stories of the day. Expert analysis from specialists and correspondents is commonplace and Nadira is able to interview experts across a very extensive variety of subjects to ensure that all angles are comprehensively explored. As a presenter, correspondent and reporter she has covered the war in Ukraine, Afghanistan crisis, the death of Prince Philip, US elections, Brexit, the Syrian conflict, world elections, natural disasters and the 2018 World Cup, to name but a few, both from studio and on location.

She began her career at the BBC as a producer, reporter and presenter simultaneously.  She has worked across most networks for the Corporation - across factual output, entertainment, current affairs and news; from the prestigious BBC Radio 4 to BBC Wales, BBC Radio 1 & 1xtra, BBC 5 Live, BBC Drama, BBC News, BBC Three, BBC Business and BBC Asian Network.

In 2015, she won the highly prestigious Asian Professional Award for Media and previously, an Innovation Award for the BBC, as well as receiving a nomination for the Mental Health awards whilst presenting for BBC Radio 1Xtra.

Nadira’s parallel career as a specialist in Media Communications reflects her continuing expertise and interest in education, she’s a Visiting Lecturer for the Cardiff School of Journalism(JOMEC) and she holds a Master’s degree in Intercultural Communication for Business and Professions from Birkbeck University.

Her life in front of the camera and behind the microphone has allowed her to test many a mean machine, work alongside the world’s military, interview numerous celebrities and prominent figures as well as a myriad of fascinating people not in the public eye. She feels that she is truly privileged in her work.

Nadira takes a seat on the Lunchtime Panel session "The Traders' Dilemma: Risk v Reward and how to get the balance right", Auditorium, 1:30pm.

RETURN TO ALL SPEAKERS